The Mother Of Thousands plant (Kalanchoe daigremontiana) is one that often warrants a double-take! Each of the thick leaves sprouts rows of smaller, baby plantlets - and each of those plantlets will readily fall down and take root, quickly filling your pot. Mother Of Thousands is aptly named!

Whether you are new to gardening or have a green thumb, Mother Of Thousand is very easy to care for, and it's great for beginner growers. Below, we'll go through everything you'll need to know to grow this showstopper of a succulent!

What Is A Mother Of Thousands?

Natively from Madagascar, this plant gets its name from the thousands (literally!) of tiny plantlets that will grow along the edge of each leaf! These baby plantlets will fall off the leaf margins and take root in the potting soil they land on if the soil is fertile. The fleshy, blue-green leaves will reach 8 inches in length, and while the Mother Of Thousands plant can reach 3 feet in height when grown outdoors, it stays small as a houseplant.

Like its cousin, the jade plant, the mother of thousand plants, will produce blooms from time to time if ideal growing conditions are met. They may produce small, grayish lavender flowers in late winter. 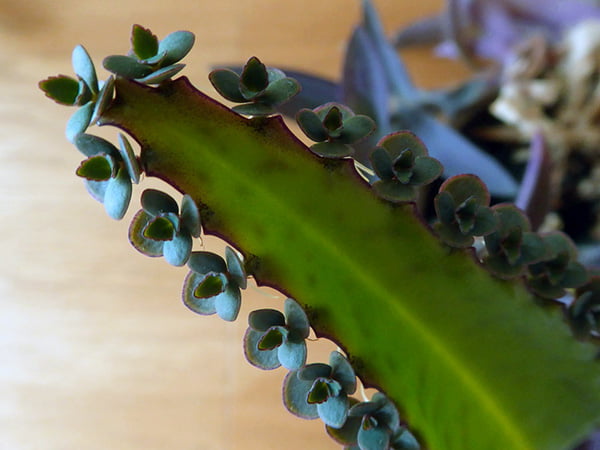 Mother Of Thousands plants require lots of bright light and can handle direct sunlight if the light isn't particularly strong. An east-facing window is ideal. Even during the summer months, the morning sun will provide enough light without scorching the leaves!

If placed near a west or south-facing window, consider placing the pot back a few feet from the window during the hot summer afternoons, or use a sheer blind to diffuse the sun into softer, indirect light. North-facing windows won't provide adequate light.

You'll know you've got the perfect light location when the leaves are bright green with a red outline along the edge.

Being a succulent species, Mother Of Thousands is very drought tolerant. In fact, it's preferable to underwater them!

In the winter, they only need to be watered once a month. Water your plant every two to three weeks during the spring through fall growing season.

When you do water your Mother Of Thousands plant, however, you'll need to water it thoroughly. Take the pot to a sink and run room temperature water over the soil for a few minutes.

The roots of this plant are very sensitive, so a lukewarm temperature is important! And if the roots receive too much moisture, the plant will suffer. Be sure to use a pot with drainage holes! Let the pot continue to drain for fifteen minutes, then put it back in its home.

If your outdoor temperature stays above freezing (USDA zones 9 through 11), then you can grow Mother Of Thousands as an outdoor plant. It's become an invasive plant in some regions, so take care to grow it in a pot or other container, even if growing outside.

For those with cooler temperatures, many gardeners grow Mother of Thousands as house plants. You can even move it outdoors during the summer, bring it in when the weather turns chilly, and get the best of both worlds!

Mother Of Thousands is a succulent from subtropical regions, and it does not like overly humid air. If kept indoors, your average room conditions will be perfect.

The roots of the Mother Of Thousands plant are sensitive - from water temperature, soil moisture, and to air circulation. To accommodate them, use a cactus potting mix. Or, you can make your own cactus soil by mixing coarse sand, perlite, pumice, and vermiculite into regular potting soil.

Planting your Mother Of Thousands in a pot with drainage holes is best. We recommend you can add a layer of pebbles to the bottom of the pot before adding soil.

A terracotta pot is preferred because excess moisture readily evaporates through the porous clay, as the plant doesn't like soggy soil. Choose a small terracotta pot to keep your plant bushier or a larger pot if you'd like a taller one.

Fertilization isn't necessary for a Mother Of Thousands, indoors or out. However, if you'd like, you can feed it with a liquid fertilizer every six to eight weeks during the growing season.

Next to no effort is required to propagate Mother Of Thousands plants. If anything, you'll want to actively stop your plant from propagating!

Each of the baby plantlets will drop from the leaf edges of the mother plant and readily take root in the soil it drops onto. Sometimes the leaves will even form roots while attached to the plant. If you have the Mother of Thousands plant near other house plants, you'll likely have baby plants growing in their pots!

If you'd like to propagate new plants purposefully, here is how: 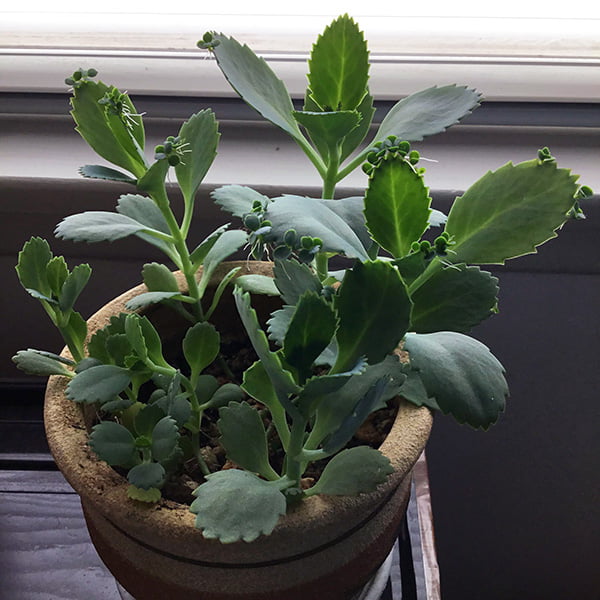 Common Problems With Mother Of Thousands

If you see your plant starting to go limp, it's most likely due to too much moisture. The Mother Of Thousands's leave should be firm and only water when the soil has dried below its surface.

Some Mother of Thousands can have some pesto issues, including aphids, mealybugs, and scale insects. These pests love Mother Of Thousands as it has thick and juicy leave that they can latch on easily.

The largest disease potential for this plant is fungal root rot, and this disease can be developed through overwatered soil conditions and can rapidly kill your plant. To avoid this, be sure to use a terra cotta pot and the well-drained potting mix.

Mother Of Thousands can spread fast as they self-sow their plantlets easily. To prevent it from spreading rapidly, you will need to stay on top of it, or it can grow invasively.

Yellow leaves can indicate a watering-related issue, and it can be either too much or too little or fertilization issues.

If your Mother Of Thousands' leaves starts to curl and develop dried brown edges, your plant is not getting water and is overly exposed to the sun and scorched.

Is Mother Of Thousands Pet Friendly?

Mother Of Thousands is poisonous in all of its parts. It's been known to cause cattle poisoning in areas where it grows wild and can be fatal to small children and small animals. It is best to keep this one away from your kids and pets.

The Homey Space is proud to be reader-supported. If you buy through our links, we may earn a commission at no cost to you.

Bella has a Bachelors degree in interior design, is a master gardener with extensive experience building homes from scratch. She designs nourishing outdoor & indoor spaces guided by the practice of Feng Shui, as well as helping clients create year-round sustainable organic gardens.

16 Ways to Create a Winter Aesthetic in Your Home

16 Ways to Create a Winter Aesthetic in Your Home

The 14 Best King-Size Pillows for Your Bed

The 14 Best King-Size Pillows for Your Bed

Refresh your Sleepscape With These 16 Wooden Bed Frames To

Refresh your Sleepscape With These 16 Wooden Bed Frames To

10 Unique Spiky Plants To Add To Your Home

Looking for something specific?

Find what you are looking for! (and maybe get inspired)

Get Inspirations Right To Your Inbox